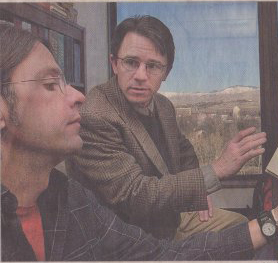 Welcome to the web site of Steven Olsen-Smith. I am a professor of English at Boise State University, where I’ve worked since earning my PhD in 1999 at the University of Delaware, with recent appointments as the Holland H. Coors Endowed Visiting Chair in digital applications and approaches to literature with the Department of English and Fine Arts at the United States Air Force Academy. My work combines traditional archival research and studies of textual transmission with digital technology, with aims of optimizing literary analysis and validity in interpretation.

As General Editor of Melville’s Marginalia Online, I am responsible for documenting the dispersal and recovery of the library of Herman Melville, author of Moby-Dick, whose holdings numbered some 1,000 books at the time of his death in 1891. The project also edits and displays Melville’s markings and annotations in surviving volumes, including recently discovered books as well as significant erased evidence unknown to scholars of pre-digital generations. For instance, the above layered and filtered image of an erased and overwritten pencil annotation in Melville’s copy of the Commedia reveals his reference to “The Monk’s Vision,” an alleged manuscript source for Dante’s epic poem, and appears here courtesy of William Reese. (For an analysis of the recovered evidence, see Olsen-Smith and Preminger under “Articles & Notes” above.)

As a scholar and teacher of American literature, I am committed to harnessing the vast potential of digital technology for the discovery and dissemination of new information about major writers, and for enriched analysis and appreciation of re-emergent and long-established texts and materials. I am also devoted to the cultivation of digital knowledge and skills among teachers and students of literature, and to the promotion of humanities broadly in the new digital age.