Melville In His Own Time 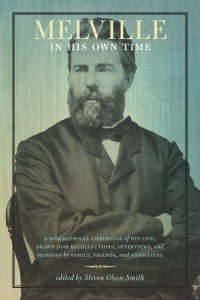 Melville in His Own Time (Johns Hopkins University Press, 2015) is a documentary collection of testimonials about American author Herman Melville by contemporaries who knew or encountered him personally. These include intimates such as Melville’s immediate family members, his friend Evert A. Duyckinck, and fellow author Nathaniel Hawthorne and his wife Sophia, as well as quondam connections ranging from anonymous newspaper writers to US President Chester A. Arthur. The book includes a general introduction that traces the rise and fall of Melville’s contemporary fame, a chronology of his life, and section introductions on featured writers and documents.

My principal goal was to gather known firsthand testimony about Melville into a single user-friendly resource, an objective aligned with series editor Joel Myerson’s conception for all of the volumes in JHUP’s Writers in Their Own Times. But by working directly with original manuscripts and investigating material details through digital enhancement, I corrected a number of errors in existing transcriptions and made original documentary discoveries. One of these was the recollection by Titus Munson Coan (transcribed at upper right in the above image from p. xiii of the introduction) that in his final years Melville traced and located his friend Richard Tobias Greene (aka “Toby”), with whom decades earlier he had deserted the whaleship Acushnet at the Marquesas Islands in 1842, leading to the adventures among the Taipi tribespeople that formed the basis for Melville’s first book Typee (1846).

As discussed in my introduction to the volume, much information about Melville was lost during the long period of contemporary and posthumous obscurity that followed his reputational decline. These conditions were complicated further by his own voluntary withdrawal both from the literary establishment and from social intercourse in general. Whereas he was sought out by a few stalwart admirers like Coan (whose remarks early and late are recorded in the above image), most recalled that he consistently refused to discuss his own writings and the trajectory of his fame, even though he continued cultivating it for future readers in the forms of late works such as the epic poem Clarel (1876) and his short masterpiece, Billy Budd, Sailor (first published posthumously in 1924). Space constraints in the production of Melville in His Own Time have warranted the Supplement linked above, to which I’ve also added an Errata page.