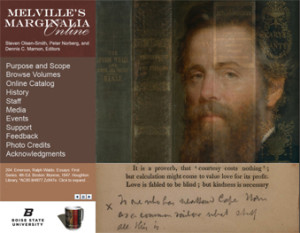 Primarily intended to make surviving evidence of Melville’s reading and marginalia widely available to scholars and students, the project also has been remarkably successful at discovering and documenting hitherto unknown copies of books from Melville’s dispersed library, and in the use of digital technology to recover significant erased marginalia in his hand. He owned some 1,000 books at the time of his death, but less than 300 of these are accounted for. Erasures are common throughout that remnant, and were likely performed by multiple persons (not just by Melville himself) with varying motives. In 2021, with support from the Gladys Krieble Delmas Foundation, Boise State University, and private donations, the project began adding data visualization tools to facilitate study of Melville’s marginalia. To learn more, visit the project at https://melvillesmarginalia.org/, and consult “Melville’s Hand” (special sections in Leviathan 17.2 and 20.2 devoted to discoveries and analysis by MMO editors and associates) under the “Articles & Notes” link in the above menu. The marginalia pictured in the above header is from Melville’s copy of Matthew Arnold’s Essays In Criticism (Boston: Ticknor and Fields, 1865.), p. 102; Houghton Library, *AC85.M4977.Zz865a.