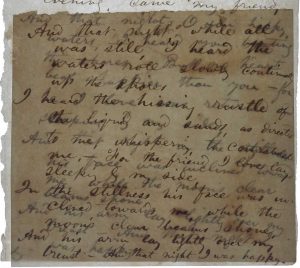 “The Inscription of Walt Whitman’s ‘Live Oak, with Moss’ Sequence: A Restorative Edition,” published at ScholarlyEditing.org, restores a sequence of 12 love poems the poet apparently wrote in response to a failed same-sex attachment. Whitman never published the sequence intact, and it was lost to scholarship until Fredson Bowers recognized that its individual manuscript leaves that survive among Whitman’s drafts for the 1860 edition of Leaves of Grass had once constituted an integrated work. Broken apart and dispersed among other poems in the “Calamus” cluster of the 1860 edition of Leaves of Grass, its narrative of love and heartache erased, the sequence was restored to its correct order by Bowers, and later first anthologized in a collection of Whitman’s writings by Hershel Parker, but in a form that failed to differentiate among changes Whitman made to the sequence when it still constituted an integrated work and later changes he made to the poems after dismantling them for publication in “Calamus.” I restored the sequence to its originally inscribed state using digital enhancement and by performing analysis of different ink mediums and offsets in the surviving manuscript leaves. As I explain in my introduction to the sequence, the restoration illuminates a significant biographical episode in the life of the poet, as well as an important phase in his poetic and philosophical development. The restored edition is also the basis for an art book version of “Live Oak, with Moss” assembled and printed by Rutherford Witthus, with illustrations by Roger L. Crossgrove, and of an illustrated trade version with artwork by Brian Selznick.